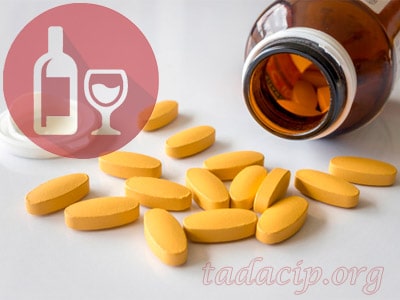 Contrary to what it seems, the erection mechanism is a complex process in which vascular, psychological, biochemical and neurological factors are involved. Alcohol consumption contributes to a reduced sensation of stimuli and thus may render normal sexual stimulation insufficiently intense to maintain a state of arousal. Problems with erection after drinking alcohol also appear due to the influence of this substance on the circulatory system. Blood pressure plays a particularly important role in the erection mechanism, which is disrupted due to alcohol consumption. As a consequence, unstable blood pressure values may cause problems in obtaining and maintaining an erection.

The introduction of potency drugs improved the sexual activity of men who had erection problems. However, these preparations cannot be administered in the presence of certain diseases or, due to possible complications, under no circumstances should be combined with substances that reduce blood pressure – and alcohol is one of such substances. But when it comes down to alcohol and the use of erectile enhancers, the matters are not as black-and-white, mostly because the prescribing information from the manufacturer approves the use of tadalafil with a moderate amount of alcohol. What is the actual danger of the combination?

In general, you should not take any medications in conjunction with alcohol. Ethanol in combination with Tadacip (if no other medication is taken chronically) does not significantly affect blood pressure. Nevertheless, it is not recommended combining tadalafil with alcohol, as there is always a risk of side effects or reducing the bioavailability of the drug, which will reduce its effect.

Why is it so? Tadalafil lowers blood pressure, and so does alcohol. Their simultaneous intake can result in a sudden and dangerous drop of blood pressure. The usual symptoms are:

How to combine Tadacip and alcohol safely

The best way to combine Tadacip and alcohol is to space their intake, and make sure your intake of hard drinks is moderate. The good news is that the chemical structure of tadalafil is such that such substances as heavy meals and alcohol do not affect its efficacy. The effects remain as intense as when you take Tadacip in a fasted state.

But here lies the danger, too: if you still experience the full potential of the drug, you are less motivated to watch out for the dangerous combination. We suggest that you abstain from hard drinks when taking erectile drugs, especially seeing that alcohol is one of the main reasons for erectile dysfunction in the first place. This might sound counterintuitive, because alcohol acts as an aphrodisiac – but as it increases libido, it decreases the response to sexual stimulation on the part of your physiology.

It is safe to take Tadacip alongside with 3 units of alcohol, but not more. What is an alcohol unit? It is 10 ml of pure alcohol, so different drinks contain different amounts of alcohol units. We have prepared a graphical presentation of how you can calculate the amount of alcohol in your beverage, and plan accordingly.